From Milk Street: The World in a Skillet by Christopher Kimball

The term “tagine” refers to a Moroccan shallow earthenware cooking vessel with a conical lid as well as the stewy dishes prepared in the pot. To make this tagine of tender, warmly spiced meatballs simmered in a thick tomato sauce—a much-simplified version of a dish we tasted in Marrakech—we use a 12-inch skillet with a lid and we bring the pan directly to the table for serving. Ras el hanout is a fragrant Moroccan spice blend that may include more than a dozen different ingredients; it’s an easy way to add complex North African flavors to your cooking. Look for ras el hanout in well-stocked supermarkets, Middle Eastern grocery stores or spice shops. If it’s not available, use 1 tablespoon ground cumin, 1½ teaspoons ground coriander and ½ teaspoon ground cinnamon to achieve a similar warm, savory spiciness.

Don’t skip the step of allowing the panko to soften and hydrate for about 5 minutes after mixing in the water. The softened panko can then be mashed to a smooth paste that will combine easily with the beef.

Measure ½ cup of the onion mixture into a medium bowl. Add the panko and ¼ cup water; stir to combine, then let stand until the panko hydrates and softens, about 5 minutes. Meanwhile, return the skillet to medium, add the tomatoes and bring to a simmer, scraping up any browned bits. Cover and set aside off heat while you form the meatballs.

Using your hands, mash the panko mixture to a smooth paste. Add the beef, ¾ teaspoon salt and ½ teaspoon pepper; mix thoroughly with your hands. Divide the mixture into 12 portions and form each into a ball.

Off heat, taste and season with salt and pepper. Sprinkle with the olives, lemon zest and cilantro leaves and serve directly from the skillet. 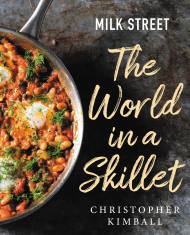 Milk Street: The World in a Skillet

125 easy one-pot meals that reveal the world of flavorful possibilities inside a simple skillet—America's most common cooking tool—from the James Beard Award-winning team at Milk Street.

From a wok to a clay pot, every cuisine has a ubiquitous pot or pan that can cook just about anything. In the United States, the most common pan is a simple 12-inch skillet. Here you’ll find 125 recipes that will transform and expand the way you use this versatile piece of cookware.

To liberate the skillet from commonplace fare, we share what we’ve learned from our travels and from cooks in more than 35 countries. We drew inspiration from the East African islands of Mauritius and Réunion for Shrimp Rougaille, based on a Creole tomato sauce that reflects European and Indian influences. And in India, a wok-like vessel called a kadai or karahi is common. We use a skillet instead to make Chicken Curry with Tomatoes and Bell Peppers.

The skillet also is a good choice for the stir-fried Sichuan classic Spicy Glass Noodles with Ground Pork, fragrant Vietnamese-Style Lemon Grass Tofu, and Mexican-Style Cauliflower Rice. You can even use it to make Three-Cheese Pasta, Skillet-Roasted Peruvian-style Chicken, and Pizza with Fennel Salami and Red Onion.

To make it easy to find the recipe you need, we organized chapters by cooking times (an hour or less, 45 minutes, and under 30 minutes) as well as sections for side dishes, pastas, grains, stir-fries, pan roasts, and skillet-griddled sandwiches. And because the cooking is limited to one pan, the techniques are straightforward and the clean-up is easy.

Great cooking is rarely about which pan you put on your stove. It’s about what you put inside it. Push those limits, and find a new world in your kitchen.