From The Intersectional Environmentalist by Leah Thomas

Conversations surrounding race, culture, religion, gender identity, and sexuality are becoming more common in our everyday lives. Some people opt out of these conversations because they fear discomfort,
anger, and conflict; however, this doesn’t have to be the case. The more we talk about our identities and the ways they influence how we experience the world, the better we can understand how they’re connected to both the privileges and prejudices we might experience.

The truth is, ignoring our differences doesn’t stop discrimination or lead to systemic change. While conversations about privilege aren’t always welcome, even in environmental spaces, the alternative—
denial, defensiveness, or dismissiveness—can further perpetuate harm and make it more difficult to undo unjust policies that disproportionately impact people based on their race, socio-economic status, location, or other aspects of identity. Hopefully one day we will live in a society where everyone has equal opportunity and access to a safe and healthy environment. In the meantime, it’s crucial to understand and unpack privilege so we can get closer to a greener and more equitable future for all.

We all have parts of our identities that shape how we relate to the world and how the world relates to us. The smallest things, from freckles on our faces to the tones of our voices, can influence how we’re perceived by others and ultimately how they might treat us. These personal perceptions can lead to an accumulation of assumptions that become societal perceptions or biases that can be positive, neutral, or negative. Privilege is a set of unearned advantages, positive perceptions, and outcomes based

Society, the media, and cultural norms help shape the biases, stereotypes, and assumptions that are tied to larger aspects of our identities like race, sexuality, gender, ability, age, and so on. Some identity groups unequally experience more positive assumptions, while others are on the receiving end of neutral or negative assumptions. These assumptions can lead to biases that cause an identity aspect—a piece of someone’s identity—to be favored or valued more than other identity aspects. When an identity aspect is assigned a higher value in a society, those who possess it are more likely to hold power both individually and as a group. This is known as privilege.

Does having privilege make you a bad person?

Acknowledging which aspects of your life and identity may have led to advantages (or disadvantages) doesn’t make you a “bad person.” Recognizing privilege isn’t meant to shame you, make you feel bad,

or suggest that you’ve had an easy life. However, the process allows the veil of denial to be lifted in order to reveal a pathway toward more understanding, empathy, and equity.

Understanding privilege isn’t cut-and-dried. Even as a Black woman, I’m able to look at my childhood and see areas in my life that helped me get where I am today. I grew up in a college-educated, two-parent household and was able to attend a top private school from fifth through twelfth grade. Even though I was one of few Black students, I still had the privilege of access to education and opportunity, which made college preparation and the application process easier for me. Being exposed to primarily white and wealthy spaces at a young age taught me how to “code switch” and blend into these types of spaces more effectively than a person of color who didn’t share this access. I’m able to recognize my many advantages in life while also recognizing that being Black and a woman in a white and patriarchal society are not two of them.

Having privilege doesn’t make you a bad person; it’s what you do with it and how you acknowledge it that matters. 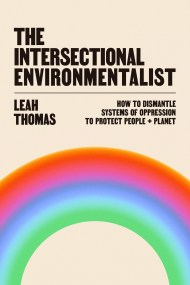 From the 2022 TIME100 Next honoree and the activist who coined the term comes a primer on intersectional environmentalism for the next generation of activists looking to create meaningful, inclusive, and sustainable change.

The Intersectional Environmentalist examines the inextricable link between environmentalism, racism, and privilege, and promotes awareness of the fundamental truth that we cannot save the planet without uplifting the voices of its people -- especially those most often unheard. Written by Leah Thomas, a prominent voice in the field and the activist who coined the term "Intersectional Environmentalism," this book is simultaneously a call to action, a guide to instigating change for all, and a pledge to work towards the empowerment of all people and the betterment of the planet.

Thomas shows how not only are Black, Indigenous and people of color unequally and unfairly impacted by environmental injustices, but she argues that the fight for the planet lies in tandem to the fight for civil rights; and in fact, that one cannot exist without the other. An essential read, this book addresses the most pressing issues that the people and our planet face, examines and dismantles privilege, and looks to the future as the voice of a movement that will define a generation.